While exiting the Canal we came as close to the equator as we will get on this cruise but still over 400 Miles North of it. From now on we only be going north until we come to San Diego, the end of this cruise. And we will do that just by following the coast. The Pacific Coast of Middle America and Mexico is fairly straight and by that I mean we do not have to sail around large areas of land that are protruding. The only part that sticks out a little bit is The Californian Peninsula but even that we can do on a straight line.

This therefore is about Navigation and staying on this straight line. Nowadays we mainly use the radar for this.  In the good old days it was paper navigation with plotting sight bearings when close to the shore. When further out it was celestial navigation. The latter has now been replaced by GPS. With modern technology also the paper charts have disappeared and now appear as an overlay on the Radar screen. That altogether is coupled to a GPS signal so the Radar picture that the navigator sees and uses is accurate to within 3 feet and sometimes even better. Even the plotting has disappeared as the ships “sails” over the screen and the ships position with everything around it, is constantly stored on a computer hard drive. Even the old paper logbook has been replaced with an electronic version. 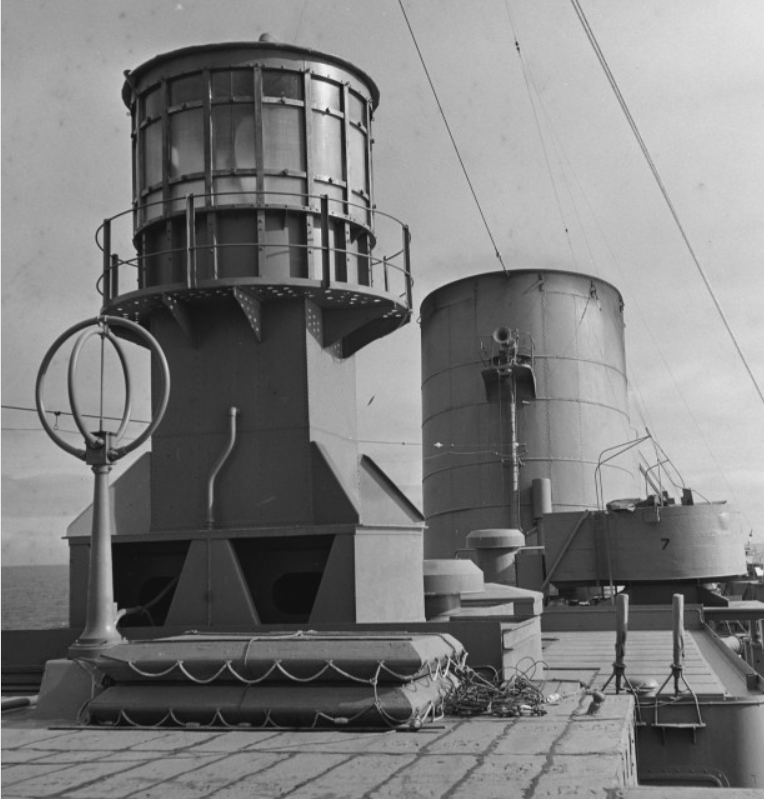 This is a radar as put on board the ss Nieuw Amsterdam (II) near the end of the war. As a troopship the N.A carried 9000 troops so a worthwhile investment. Cargo ships  would have to wait many more years. Please note to the right the Anti Air Craft Gun station.

RADAR, Radio Detection and Ranging, has been around since the 1930’s. It made a quick progress during WWII and at the end of the war most War ships and Troop ships had one. Not so much for finding out where they were, but for recognizing other ships in the area during bad weather or fog.  Then the systems developed slowly, but it went fast again once PCB’s could be used in the system. Now it almost replaces looking out of the window as the system can look out with good reliability to 48 NM and even more. The human eye on the bridge can do about 12 to 14 depending on the atmosphere. But I said –almost- as Radar still only picks up what gives an echo or what has a Radar reflector or AIS beacon on board. Plastic, wood and round forms are still a challenge, so we still have to look out of the window. With the RADAR systems becoming so good, there is now a drive to go invisible and that is where Stealth Technology is coming in. 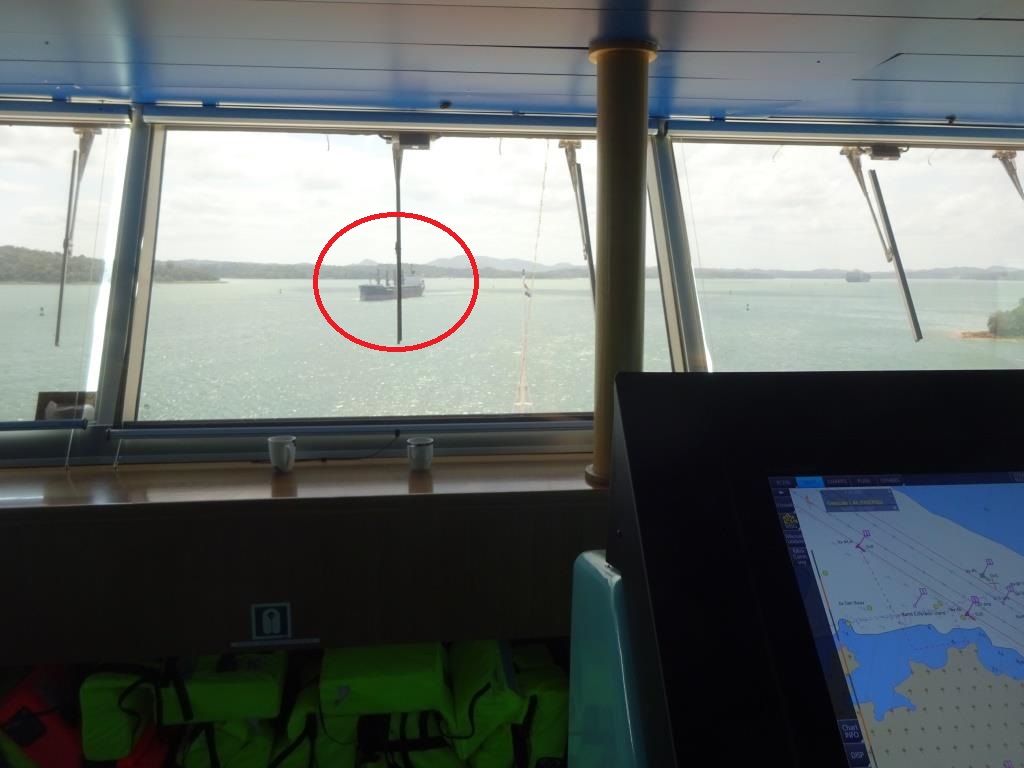 This picture was taken in the Panama Canal yesterday. Note the circled ship and compare it with the Radar photos below.

On board it is now the main system to navigate on. And with the computer assistance we can plan the whole voyage that we are going to make before we go and project it on the screen while we make the voyage. Information, expected dangers, boundaries it all can be put in before hand and we do. We even put in the lane, path width that we want to stay in, so we know that we are in safe waters at all times. What is sometimes confusing for the landlubber is the fact that we sail with our Radar/chart picture, North Up. That means that the top of the chart on the Radar to pointing to the north. But it also means that it is not the same as the picture outside. That option we call Heads Up; the ships course points up and we see on the screen on the left, the same as we see outside on the portside and the same for the other side. For plain sailing through a channel or so, it can be handy, but the merchant navy ships sail by courses which are related to the true north. So if the course would be 123o, then it gives the angle between the true north and the direction of where the ship is going. And then you can give course orders accordingly. If you are going North Up, the only thing you can say is”steady as she goes after a course change” because the course heading does not mean anything anymore. 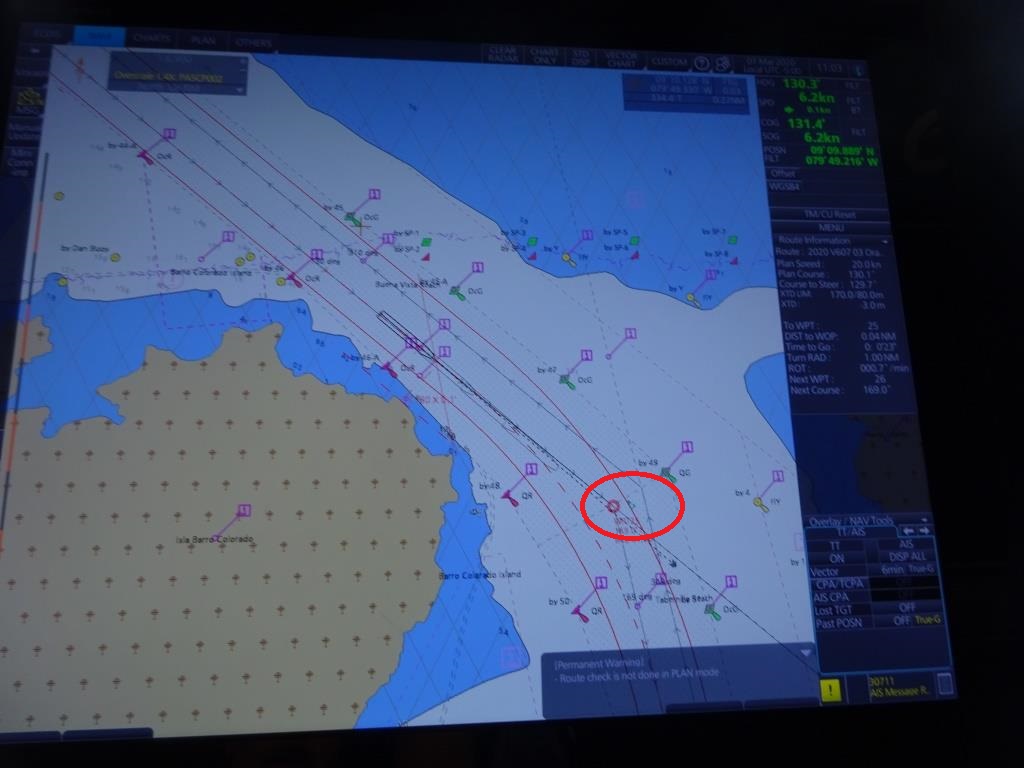 This is the chart/radar picture we use. North up. We were traveling south in the canal and thus the circled ship shows at the bottom o f the screen. Confusing if you are not used to it, but if you always sail with True North Up, you soon get used to it.

We even do this in the Panama Canal. Although there we could sail through the canal only with rudder orders and then “steady as she goes” we are where we want to head for, (This what the Panama Canal pilots do as they sail on ranges) but the ships navigator keeps working by courses and will verify if the course steered coincide with the way the pilot lines up the ship. 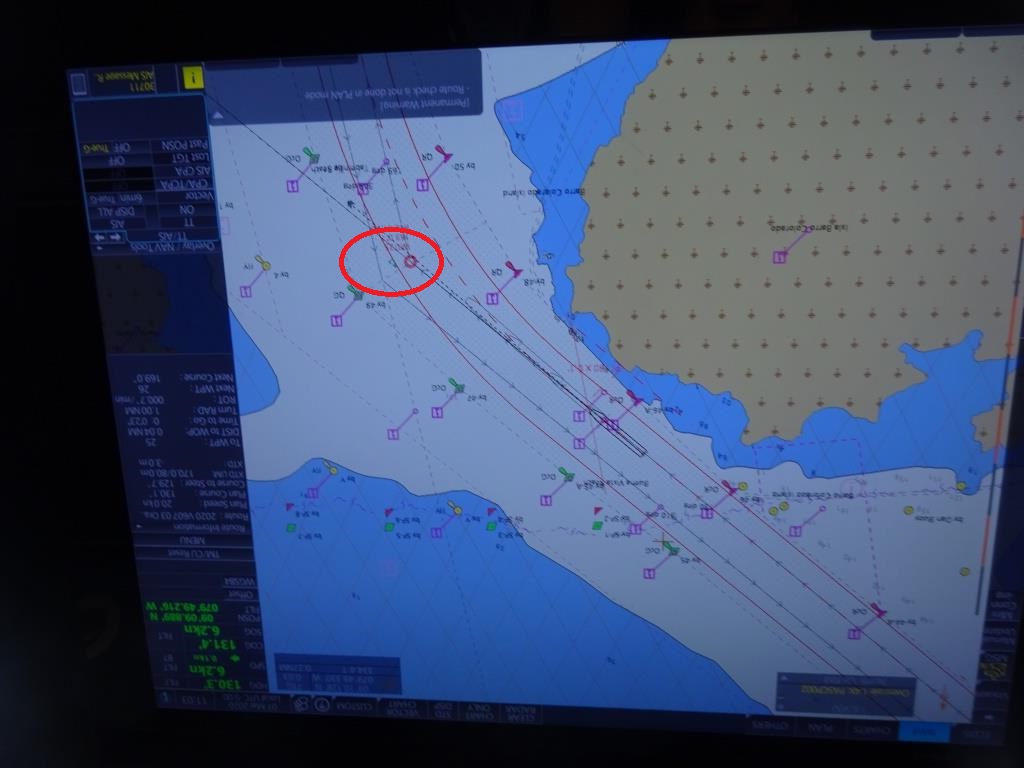 And this is our radar screen upside down reflecting “Heads Up” so it shows the same lay out as outside. Now with the circled ship to the left of our cruise line, reflecting the situation outside . And that is what most pilots like, see the land on the screen at the same side as when looking out of the window.

So as we are now in the North Pacific Ocean, we do the same thing. The Radar display is North up, the voyage plan is laid out over the screen and ships in the area are detected by RADAR and put on the display as well, with the information of how close they will come. We like them all to stay away at least one mile but that is another story. 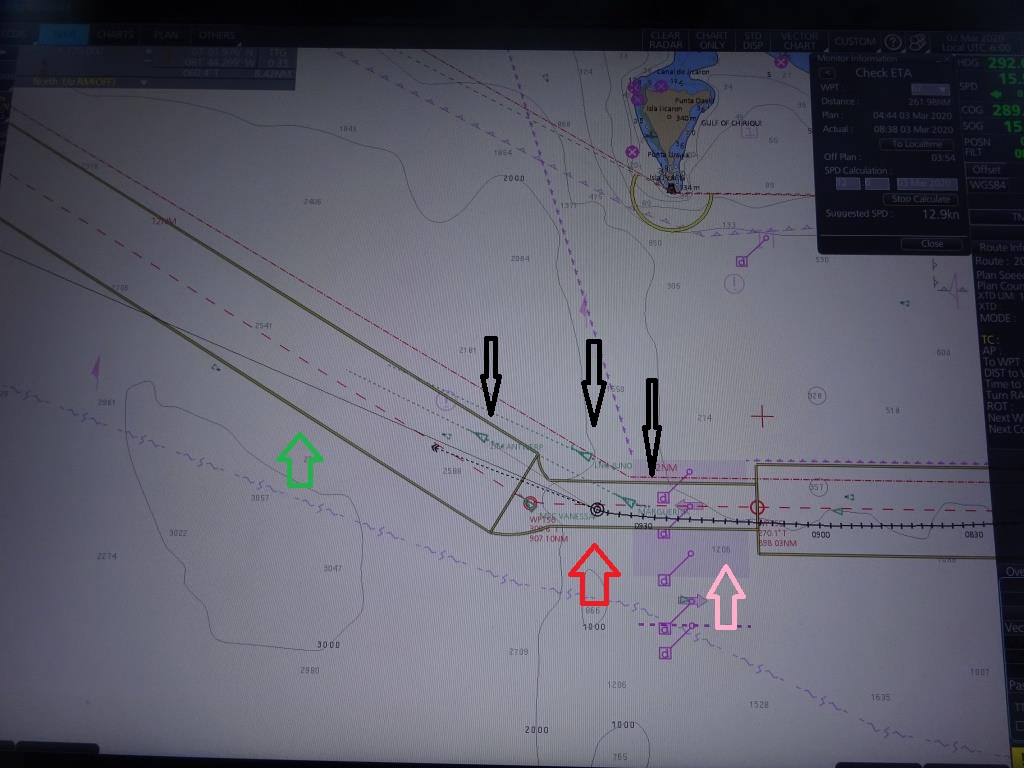 And this is the chart overlay that we can put over the radar screen.  I have blanked out the Radar information for the moment to give a clearer picture. Black arrows, ships next to us. The longer the green dotted line, the faster they sail. Pink is a Traffic Separation zone, keeping ships going away from the Canal and towards the Canal apart. Red is our ship the ms Rotterdam. Green is the Path width that has been made before the cruise started. As long as the ship stays in those boundary’s then it is in safe waters. The closer we will come to a port, the smaller this path width will becomes. But here it is several miles.

Tomorrow we are in Puerto Caldera, Costa Rica. This is basically a tour stop as Costa Rica has probably the best Eco tours of whole Middle America. But there is also a tour to the Capital of San Jose, 2 hours’ drive up the mountain and that is an adventure in itself.

Weather: Hot, very hot. 94oF / 34oC Partly Cloudy with a gentle breeze. That breeze is supposed to come from the south so it might help to keep the temperature down a little bit.