By 06.30 we were approaching the Puerto Chiapas sea buoy and by now it is standard procedure that the pilot boat was already bobbing around on the swell. This is the only pilot in the whole of Mexico that I know of who is early at his station. Most are on time, some meet you half way in, some on the dock but this one is there at least 30 minutes before the ship arrives. Good reason to take advantage of and so instead of adjusting the speed for 0700 at the sea buoy, the OOW let the ship continue and we had the pilot on boat 15 minutes early. As mentioned before, I sail the ship into port here myself as with the current and the swell it is a tricky operation, but the pilot is very useful for an update about the last changes. The port entrance is nothing but a widened and deepened river estuary. Near where we are docking there are 3 rivers coming together and they deposit a large amount of silt in the river. That brings a challenge to the port as the entrance is continuously silting up and two dredgers are fully employed with keeping the fairway open. That means the deep water is only there where the dredgers have been. When you sail in, you try to stay on the leading lights which give you the centre of the channel. However with the silting and the dredging that is not always the best option. So the pilot sometimes advises to favor the red buoy side or the green buoy side, depending where the dredger has last been.

That makes me always a bit uncomfortable as there is normally a swell running into the port. Last year there was a day where the swell was so large that my colleague had to cancel the call at Puerto Chiapas as there was the real danger of the whole ship slamming on the sea bed as the trough of the swell reduced the water depth so much that there was less water than the ships depth. Thus question number one for the pilot is always, how much swell is there running into the entrance. If the answer is good, then I still check it when coming closer, as the pilot might be under commercial pressures to paint a slightly more rosy picture than really is the case. In case that I then do not like what I see, I can always give full astern and back away. Not a pleasant maneuver to make but still a lot better than going aground. 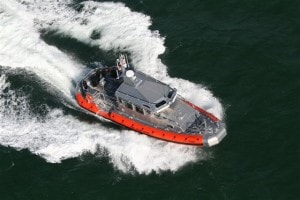 Latest gadget of the Mexican army. Rearch & Rescue and Protection boat. The bow and stern can both take a machine gun so it is a very versatile escort boat as well.

Today the swell was not really running into the entrance but in front of it, so I kept the stabilizers out and some speed up while going in. The Statendam still rolled a little bit but that was not to be avoided. That swell and that rolling make the steering a lot more difficult. You then have to go from giving course orders (and let the quartermaster figure out how to steer that course) to rudder orders and try to anticipate how the swell will move the ship. That takes a lot of concentration and any distraction is unpleasant. This time the distraction came from the Mexican army who thought that this was the most opportune moment to start dropping parachutists on the beach. According to the pilot, they were doing that on purpose to coincide with our arrival, to show that Mexico is taking the security of cruise ships were seriously. We know they do; since a few weeks each port now also has Search and Rescue boats, the same type as the USCG uses. I had to keep my eyes on the ship but luckily they dropped a 3rd batch after we docked, so I could have a look at the procedures as well.

By 07.40 we were safely docked and the ship cleared. We are one of the few cruise ships calling here and thus the locals are pulling out all the stops to make us happy. We had 16 dancers and a full marimba orchestra to welcome us today and they were there as well at departure. Until recently only Holland America was coming here but now also Oceania is coming in with the Regatta. So our pilot might get more cruise ship work. Thusfar he has been mainly busy with looking after the cargo ships for the coffee, fertilizer and cement.
Departure is an easier affair here, as with going out the bow is just cutting through the waves and before the swell can get hold of the ship you are in deeper water and can turn the bow straight into the swell. That swell was becoming more pronounced during the day and I was glad that my call was not scheduled for tomorrow.

Tomorrow we are in Puerto Quetzal where we have the pilot at 0500 for a 0600 docking as the tours have to leave early for the Tikal Ruins. The weather forecast is looking great again including a wind still morning which is handy for docking.