Today we had a grey morning followed by an overcast afternoon. Not the greatest of weather but at least it did not rain. The work of clearing up and final fitting out continued as per schedule.  Everybody is running all over the place/ship to fit the last small pieces of a gigantic jigsaw into place. Where are the keys, who has the keys, where are the glasses for this bar and why is this box here while it clearly belongs on another deck? 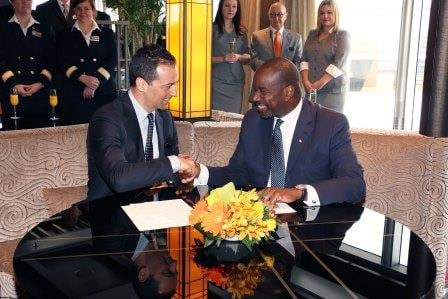 Mr. Antonio Quintano from Fincantieri hands over the ship to Mr. Orlando Ashford from HAL. The officers in the back show the new Event Staff grey & orange uniforms.

First let’s share a few photos from yesterday from the hand over. Public Relations could go where I could not and made sure the signing over of the ship was immortalized. Followed by the flag hoisting on the aft deck. 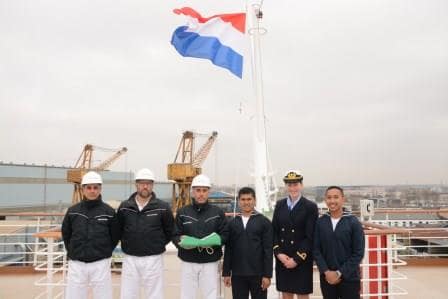 Dutch Glory. The Lady officer you might recognize from an earlier blog as she was in my school class, last September on the Westerdam.

And then life continued as described yesterday. Last night we had an appreciation dinner from Carnival Corporation for those from HAL and the Carnival new build team who helped build the ship. It was preceded by a cocktail party where Stein Kruse CEO Holland America Group, Orlando Ashford president of Holland America and Keith Taylor Exc. VP of the HAL Group spoke a few words. This was followed by dinner. 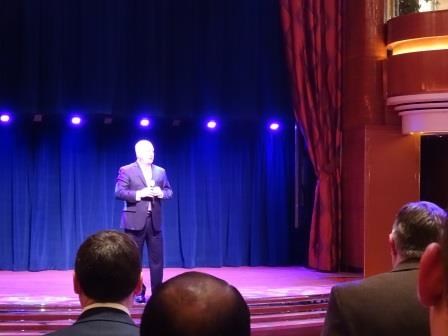 Brief speeches from Sr. Management. Apologies for the photo but Mr. Taylor is as bald as I am and then everything tends to reflect.

Although I was a very last minute addition to the team I was invited as well and had the honor and privilege of ending up at the table of the President of Carnival Corporation, Arnold Donald. What they had done was to park regular officers and Carnival Corp new build people at large tables and each of those tables was hosted by somebody from Carnival Corporation Head office. I could not resist taking the below photo as it showed the highest man (Except Mickey Arison who was sitting somewhere else) of the company at the table and almost next to him the newest officer on the Koningsdam, the Deck Cadet. 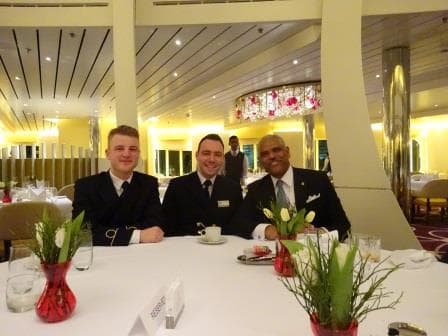 The Koningsdam Cadet to the left, his mentor the First Officer in the middle and the President of Carnival Corp to the right.

We were sitting at a table nearly in the center of the dining room and thus I could take this evening shot of the Grand Staircase which links the upper and lower dining room. 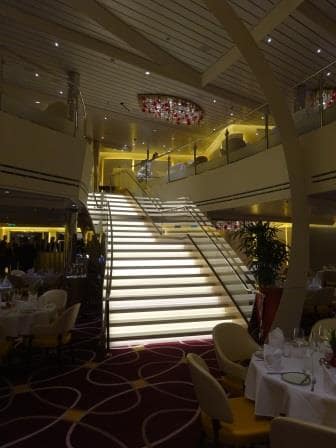 I am going to try this with my wife. Descending down the Grand Staircase on formal night. As it was once done during the Ocean Liner days in the 1930’s.

Then the Cast gave a 40 minute show called Off the Charts on the World Stage and it is really IMPRESSIVE.  I cannot post photos as they are still perfecting the show but if you make a cruise on the Koningsdam you are going to be blown away. 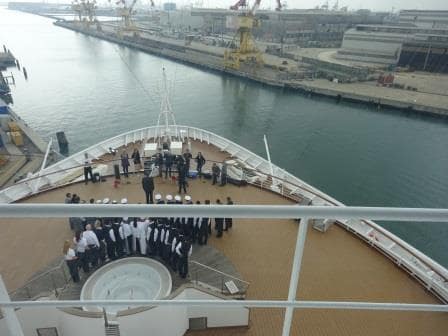 A cold and chilly performance on the forward deck with Mr. Orlando Ashford between the video team and the officers.

This morning there was a photo/video shoot and other related business all over the ship including a Video shoot on the forward deck where the Officers of the ship formed the background over the three Observation Deck levels. 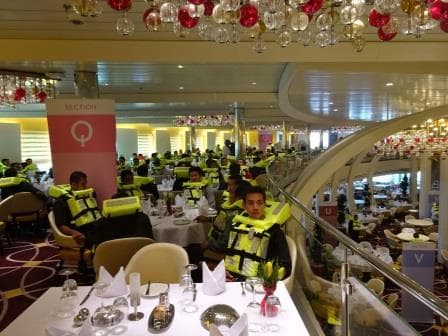 400 Crew in the dining room. The guests will do the Safety Briefing without Lifejackets, to avoid accidents by tripping over straps and falling down staircases.

However soon all the glamour was forgotten and it was back to work. As the Koningsdam is the first ship with indoor mustering we are training very hard to get the crew into this different way of doing the Guest Safety Briefing. Today we did the “crocodile line”. Some other companies call the “conga line”. 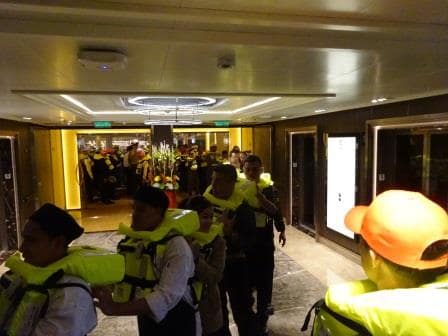 Marching in a Crocodile line out of the Dining room.

We assembled 400 crew in the dining room and then had them march to their assigned lifeboat. Running a crocodile line is not easy as the ones in the front tend to walk too fast and then the last in the line cannot follow and the line breaks. 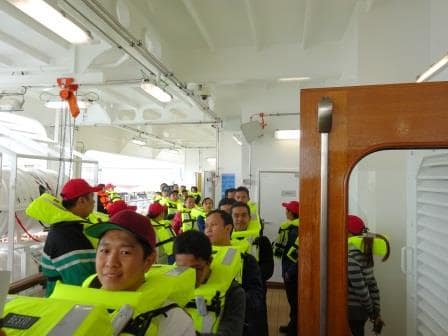 On the way to the boat station.

For that purpose we have one lifeboat team member at the front of the line, one in the middle and one at the end to regulate the pace. 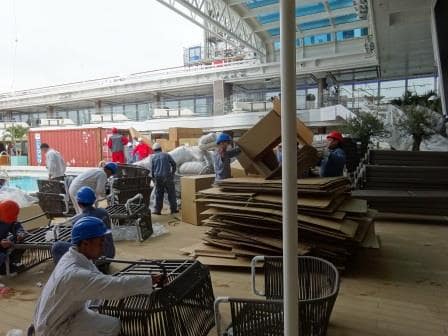 Once that was done everybody had to race back again to their place of work. One of those areas was on the Lido Deck where now most of the garbage containers have been removed and replaced by the containers with the deck furniture. For some unknown reason everything came un-assembled and thus the deck boys set up their own Conga line: empty the container, take out of the box, flatten the box, connect the top and the bottom, put the screws in and stack the deck stretcher in a safe place. 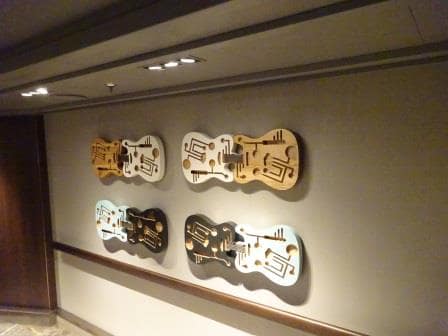 I think they are Guitars..

I am ending again with a piece of art; Guitars (I think, or maybe juke –lilles) on the way to the amidships staircase.