I hope that everybody is doing well and adhering to the precautions needed for succeeding in defeating the Covid-19 virus. Here in England vaccination is well on its way and it is now becoming apparent that the continuous spread of the virus is mainly due to not keeping a social distance, wearing a mask and washing your hands.   Not much different as what we were used to in the past when there was a norovirus challenge on the ships. The Covid-19 virus is of course much more aggressive and deadly but the principles of combating it are not much different. Remember when you were on the ships; Sing happy birthday twice when washing your hands with water and soap. If we not all do our little thing, then we will never get the cruise ships going again. END_OF_DOCUMENT_TOKEN_TO_BE_REPLACED

So I am back on the blog. A blog which I had to stop as things were getting too confused and fast moving for me to relate correctly and with sufficient authority. If you look at the last blogs, I had mentioned already a few times that the company was moving faster than I could record it. Then throw the world stage, with all its politics into the mix, and I did not know any more if I was coming or going. So we stopped.

On 09 April the last guests left the ship, and then ship went into warm lay-up. Healthy guests but a few guests remained on board who could not leave as they could not get home for all the reasons that went with the current situation. Things on board are now returning to a sort of normal, albeit a new normal.

This blog is a compilation of the past period as seen through the eyes of yours truly and as I am not involved in politics (*) there is no opinion about why something happened, just what happened and how the ships made it work.

(*) Maybe Captains should all run for office, each in their respective country, I am absolutely convinced the world would have less issues. END_OF_DOCUMENT_TOKEN_TO_BE_REPLACED

I had not been to Grand Cayman since 2012 but not much had changed apart from one or two more Condominium buildings near the beach. For the rest the sky line still looked the same. I do not know about downtown, more shops or less, as I did not go ashore. Too warm, too many people and too much to do. The too many people came from the four ships in port. We had the Norwegian Epic on Anchorage number 3, The Liberty of the Seas on Anchorage number 2, the Disney Magic on Anchorage number 1, and the Pullmantur Monarch was scheduled for Anchorage nbr 4 but arrived late and opted to stay on the engines instead of passing the Oosterdam who was scheduled to drift but was now sort of blocking the approach to anchorage number 4.  The Oosterdam who had arrived around 07.30 was drifting right in line with the tender dock in downtown Georgetown and that brings the question why is the anchorage number 4 East of  the other 3 which are counted from the far west  down to the town. 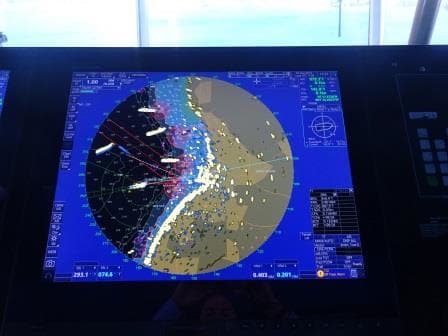 Ocean Liner row in Grand Cayman. From top to bottom: Norwegian Epic, Liberty of the Seas, behind it the Pullmantur Monarch, Disney Magic and behind it the Oosterdam right opposite down town. the light blue area indicates shallow waters, The yellow is the reflection of the radar.

Reason is very simple, anchorage nbr. 4 was an addition.  It was added in the late 90’s when more and more ships came to Grand Cayman and after some political bickering another small piece of sand bank was made available for an extra ship. You would expect that if it had been a logical place from the beginning, 1,2,3,4 or 4,3,2,1 would have been their all the time. This already gives the indication that it is not a great anchorage. It is when there is no wind. Then you have the best parking space of everybody. But there is always wind in Grand Cayman and then it is only a nice anchorage if the wind is exactly right. ENE to keep the ship lying behind its anchor and the wind pushing it nicely off the Reef. When the wind is more to the East, then the wind is stretching the ship behind its anchor and the stern goes towards the ship at anchorage number 1. And they do not like that. Nor does the ship that is at anchorage 4. When the wind goes more to the south or to the north, the ships swings towards the shallows and that is not nice either. 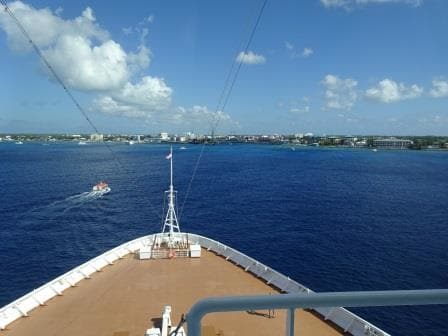 Looking at down town from the Bridge of the ms Oosterdam with a ships tender heading straight for downtown.

Today it was a wise decision of the Monarch to stay on the engines. There were squalls in the area causing ever changing wind directions and the wind was never right for anchorage nbr 4. If they would have been there and had to leave, escape, departing quickly, it would have been difficult as the Oosterdam was right behind anchorage. Unfortunately because of their late arrival time, they could also not hoover near the anchorage as the Oosterdam was already doing that and we had no intention of moving. 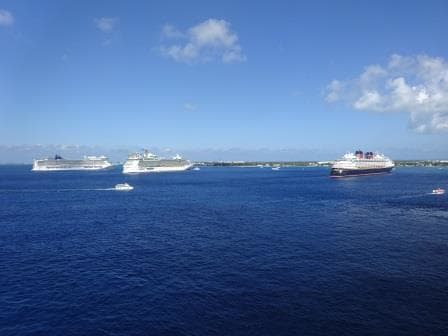 The ships at anchor. There is quite a bit of space between them, needed in case one ship swings more than the other, or faster.

Yesterday I mentioned the most likely cruises the ships who call at Grand Cayman were making, so let’s see if that came out: Norwegian Epic ( 8 days) is making a around Cuba cruise, starting in Cape Carnaveral, going Eastwards and then west under Cuba. Liberty of the Seas (7 days) from Galveston is coming down the Westside of Cuba and goes as far as Jamaica and then back north of Cuba. The Disney Magic (7 days) sailing from Miami comes down from the west as far East as Grand Cayman and then goes west again. The Monarch (7 days for mainly Spanish speaking public) sails from Puerto Limon and goes as far as Montego Bay before returning.  Thus only the Oosterdam has Grand Cayman as part of a longer cruise, the rest is all on shorter cruises, and either staying in the west side of the Caribe or doing a very quick circumnavigation of Cuba.

The total number of guests which came ashore today from these ships based on the lower occupancy, was 14,400 guests, maybe even more, as Disney with all the kids on board is often way over the minimum occupancy rate. So the shop keepers and tour operators did not have anything to complain today.

We ran our own tender service while the other operators used shore tenders. Those shore tenders are nice and big but take a long time to fill up and to empty so whether it is a better service is a big question mark for me. Also they tendered to their own dock, further out of town, except the Monarch who also came to down town. But we had the south dock which is a perfect dock for our tenders so even with this busy day we had the best of it.

Tomorrow we have a sea day. Around 04.00 hrs. In the morning we will round Cabo San Antonio at a distance between 6 to 8 miles and for those up early, at that distance you can see the beam of the lighthouse clearly sweeping against the sky.

Today we are in Western part of the Caribbean Sea, heading for Grand Cayman. And the course line is basically one straight North Westerly heading until we arrive there.  Until we get there, there is not much excitement to be gleaned from the around the ship. Just sun, sea and wind. And numerous Starlings who are flying around the ship and who are not very happy with the ship. A bird is only really happy with a ship when it can hang on the wind generated by the bow plowing through the water. The airflow is pushed upwards and generates just sufficient up-lift for a bird to ride on it. On the Pacific side you see them hovering there for hours and hours. Here in the Caribe they have a problem, the Trade Wind. When going North West that is a following wind, which blows about 5 to 10 knots faster than the ship travels.

Birds hate a following wind as it plays havoc with the uplift needed under their wings. So today we saw a continuous performance of: bird getting into position, bird happy for a moment, wind increases for a moment, wind now upsets the balance, bird unhappy and flies away. Most of the time to the stern of the ship. Then either the birds has forgotten what has happened, or there is a new bird but shortly after the whole sequence starts again. It does give the officers and quartermasters on the bridge something to look at, because for the rest the sea is empty. 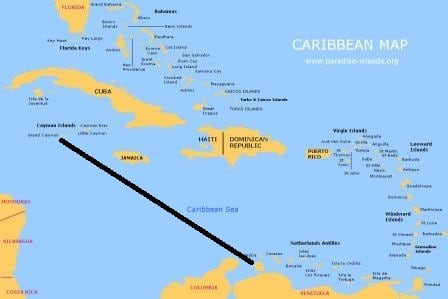 Can not be much simpler. Heading straight for Grand Cayman.

During last night we met a few ships who were on the line between from Panama and the Mona Passage (between Dominican Republic and Puerto Rico) or going even further east but by the early morning the ms Oosterdam had sailed in an area of nothingness.  Here the water is very deep up, to 9000 feet is the norm, and that makes it less interesting for fishing boats and there is very little commercial traffic as there are not many cruise or regular ships who sail from the east coast of Costa Rica and Guatemala over to Grand Cayman or Jamaica. When we do our 7 days cruise next week, same as last 12 days ago, the Oosterdam will hug the coast and hop from port to port there. It does not hop over to Grand Cayman as the distance is just too long to fit in a seven day cruise. Hence we visit Grand Cayman on our 14 day around the Caribbean cruise when the Island lays on our return course back to Tampa. More or less straight in the line from Oranjestad to the West Point of Cuba. (Cabo San Antonio)

Thus we will meet cruise ships tomorrow who are also on a sail by the island cruise. Quite a few of them have just started their cruise in Miami or Fort Lauderdale and now have a sea day; they will have sailed around Cuba early this morning and will then arrive at Grand Cayman tomorrow. Or they have been visiting a port to the East (Bahama Island, Dominican Republic or Jamaica)  and are now coming westward, either to go to the Yucatan (Cozumel, Progresso) to do the same we are doing, heading back to Florida after their stop at Grand Cayman.

Tomorrow there are supposed to be four ships in port and it will be interesting to see on what schedule they are, as how long they are staying totally depends on the time needed from where they were coming from or where they are going to. We will have a relative short stay with everybody back on board by 14.30. hrs. to ensure we will make Tampa on time. The Captain has already announced that he cannot wait for stragglers. For them there are very good flights back home but it is a fuss to come back and collect your luggage. So it is better to be on time and catch the tender home before it leaves without you.

Tomorrow we will be another warm and sunny day and ashore in Georgetown it will feel even warmer than in another port as the sand (which everywhere) reflects and absorbs the heat.   No clouds expected at all and 84oF. 29oC. The trade wind is keeping this temperature down from soaring into the 90’s. if the wind was not there.