Today we sail from Willemstad on a SSW course heading for the Panama Canal. Apart from it being too windy it is a sunny Caribbean day. The strong breeze has pushed the waves up high enough to create that corkscrew motion again which I mentioned some time ago. I am seldom poetic but every time it happens I have to think about a poem by Rudyard Kipling, Rolling down to Rio. I believe somebody even made a song out of it.

I never sailed the Amazon and I never reached Brazil,

But the Don and the Magdalena they can go there when they will,

And weekly from Southampton great steamers white and gold,

And I’d like to roll to Rio someday before I’m old.

I’ve never seen a jaguar nor yet an armadill – o,

Dillo’ing in his armour, and I s’pose I never will,

Unless I go to Rio, these wonders to behold,

and I’d like to roll to Rio someday before I’m old.

So the whole ship was happily lurching against the occasional sway of the ship. The stabilizers were doing their utmost to stop it and the captain had announced it on departure. Today there were no green apples at the Front Desk, so obviously it was not affecting the guests too much. And certainly not the crew. Today we had something going on that the guests never see during a cruise. It is get togethers by the crew. In the movie world they call it bonding, we just call it a get together or in this case Family –Makan.

The company greatly encourages activities which bring groups in the ship closer together. So on occasion we have a crew party and the whole ship can let their hair down for an evening. Then there are parties and get togethers within the departments. Sometimes with snacks and disco (Engineers are good at that with complete light shows) or what the deck department does, with food, drinks and games. That is where the word Family Makan is coming from. Family everybody understands and Makan comes from the Indonesian word for To Eat. Our Sailors are very focused on food and they can put away enormous quantities. 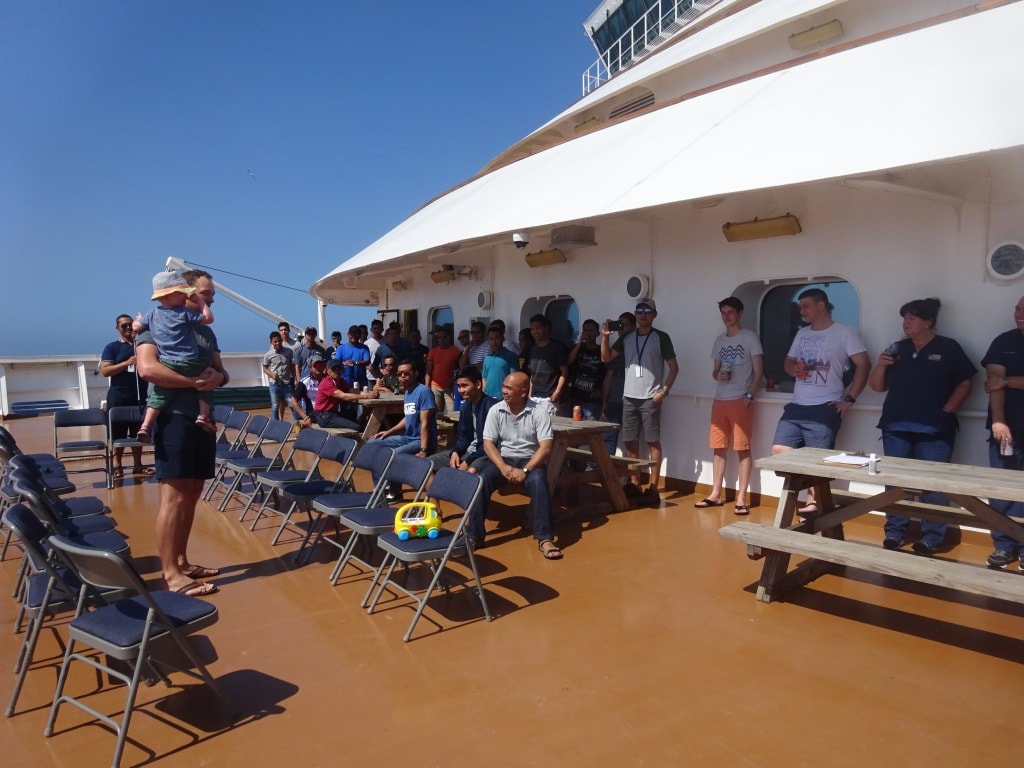 It has more or less become a tradition that when the head of the Deck department goes home, the Staff Captain, that something is organized. Thus today we had food and drink on the mooring deck followed by tug of war between the various sub groups in the deck department. (Officers, Medical, Security, sailors, Fire Safety etc.) the whole thing is really light hearted; the real serious tug of war games take place during Independence day celebrations of the Indonesians and Philippino’s Then it goes very hard between the Deckies and the Meccies and most of the time the Engineers win as there is more muscle power there. Today it was all about silliness and good feelings. All the Deck officers could attend as well as the Captain had volunteered to take the watch for the duration of the party. 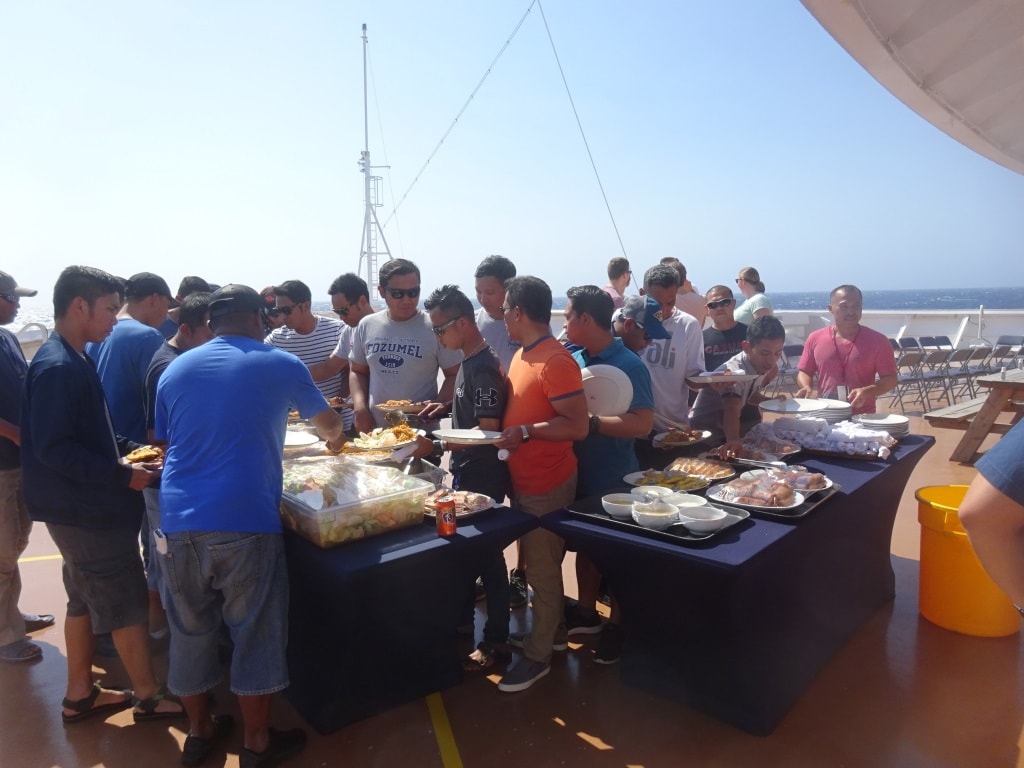 Not  much was left once the sailors where through with filling their plates.

We will wait and see. The convoys in the canal are as fast as the slowest ship is traveling and thus it is by no means certain that we will be able to keep to that schedule. Last cruise we were 1 hr. late in Colon which was not good for the guests returning from tour, but good for the local bar owners as the guests had to wait somewhere.

Weather for tomorrow. Light wind and hot and humid. With a chance of a tropical rainbow…………… 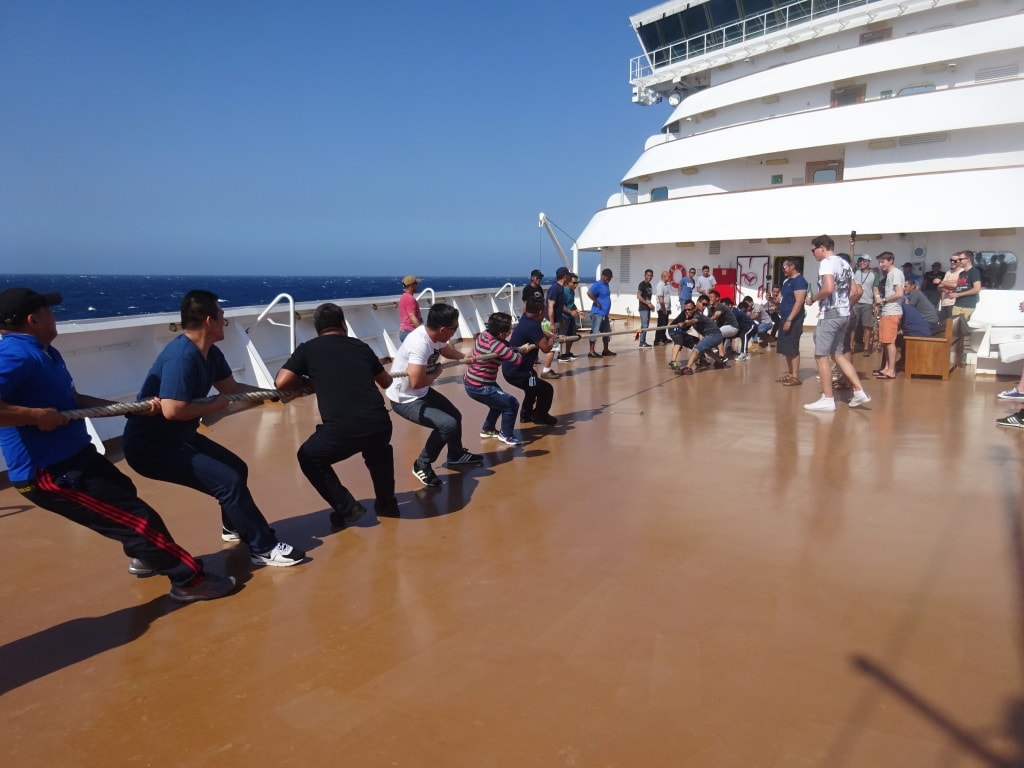 Tug of war.  Safety attendants against the sailors. Unfortunately some of the sailors were wearing flip-flops and that does not work with a tug of war………………………………